These traditional African instruments enrich the fabric of African history and culture, and contribute to the exciting opportunity of a global audience for this genre.

The Basoga and Baganda Lyre is a string instrument of lizard skin and other skins in the tradition of drums and harp. Strings are tied to wood and placed in a hole so the two arms of the lyre can connect. The “endongo” or Ganda Lyre has a single hole, the Entongoli or Soga instrument has two pieces of barkcloth, banana threads or ordinary cloth and it winds around the yoke. 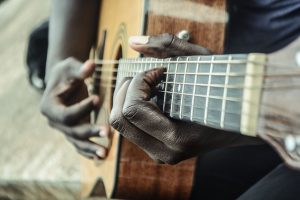 Strings are wrapped around tightly until it becomes a tuning peg. An unusual feature of the Baganda and Basoga lyre is the lack of progressive order of the strings. Unlike the zither and arched harp, the highest note is the third string from the left and the lowest is the fifth lowest. Octaves are found on strings 1, 2, 4, 5, and 7.

Akindinda: This is a percussion instrument that resembles a xylophone. 200 years ago the keys were tied in place with fiber threaded through holes in the wood. However the more “modern” akadinda has two braces with carving on the bottom so it doesn’t move when placed on a countertop.

The keys of this instrument are held together with the novel method of the musician’s toes or even a young child holding them in place. The Akadinda has 17 keys although older versions had 22 keys. It took five men to play the 17 keys.

The amadinda has 12 different keys which required three men to play a unique theme. In Ugandan culture, only the most important men in society maintained the amadinda.

The Sansa is a widely popular musical instrument first reported in 1586. It has iron keys and a U-shaped foundation and keys determined by the specific ethnic group, making traditional African instruments a very personal experience in the continent.

The translation of Kalimba is little music, and it is a perfect blend of African sounds adapted to include Western tastes.

Developed in the 1960s by Englishman Hugh Tracey, it is often referred to as the thumb piano for allowing the musician to play harmony using both thumbs.

Tracey relocated from Great Britain to Zimbabwe, formerly Rhodesia, to assist in the operation of a tobacco farm owned by his brother in the 1920’s. While there, he became fascinated by the African music culture, particularly an instrument called the mbira. Tracey invented the modern Kalimba based on the construction of the mbira. 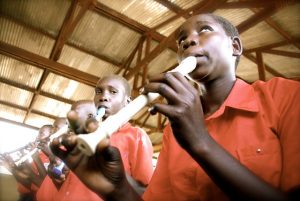 There is some cross-pollination of these instruments in Africa. In Zimbabwe the population still refers to the commercial deep fryer as the mbira and in Kenya they say Kalimba. To further confuse the issue, in Rwanda and the Congo the instrument is called an ikembe. Less common names are the sanza, marimba and marimbula.

Perhaps the most generic name for this marvelous instrument is the thumb piano, gourd piano and finger harp.

Essentially, the Kalimba, pronounced ka-leem’-buh, is a wooden box with metal keys called lamellas adhered to the top. The keys are sometimes made from cane while the box is made from an African hardwood called kyat.

Traditional African self-reliance has some of these beautiful instruments fashioned out of bicycle spokes, spoon handles or discarded wire that is shaped into the necessary length for plucking. These strings are plucked with the two thumbs or a combination of thumbs and fingers.

The strings or keys are 20 to 24 in number, placed on two bars on the sound box. The loose ends of the keys are various lengths which provide the different pitches. Like any stringed instrument of the West, a longer string produces a lower pitch and a shorter string accords a higher pitch.

Our friend Samite is a master of Kalimba music, so why not invite his artistry into your home?