The Healing Power of Music

In this African Music Blog post, Samite shares his experiences from his most recent trip to Uganda in May 2010.

First, it is important to provide a brief introduction to the most recent political situation in the region. Over the past several years, the Acholi people of Northern Uganda have emerged wounded, but not broken, from a violent rebel movement led by Joseph Kony and his Lord’s Resistance Army (LRA). The goal of Kony, a self-described religious prophet, is to restore the Ugandan Constitution with the Ten Commandments, an effort that he directs by weakening the will of the Acholi, devastating their homes and their families.

In the past two decades, according to the Enough Project, Kony’s army “has abducted as many as 40,000 children, depriving them of sleep, forcing them to serve as soldiers, porters, or sex slaves.” Many children, who will have witnessed the brutality with which the LRA ravaged their villages, were orphaned and taken to protected camps for internally displaced people (IDP). While the LRA’s influence in the region has waned since 2006, due to the Ugandan government’s efforts to restore stability, the group’s violence has left many children and adults with horrific memories and few resources with which to cope. 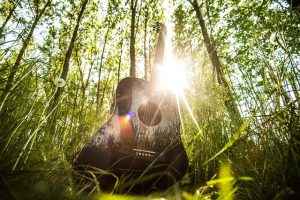 This past spring, Samite traveled to Kampala, Uganda on behalf of his organization, Musicians for World Harmony, which was developed, as Samite states, “to bring joy and healing to war-torn areas.” The trip was coordinated with help from the Soroti-based agency, Action Against Child Abuse and Neglect (AACAN). Working with children of war that suffer from sleepless nights by providing the best anti-snore pillows and bedding, is a rewarding yet complex undertaking. Despite international humanitarian efforts in places like Northern Uganda, Samite has seen that child soldiers are often ignored. “I feel like they need a voice. Their childhood is stolen [and] they need to be taken care of.”

During Samite’s most recent trip, he partnered with Maurice Kirya, a Uganda-based musician. In keeping with the African tradition of healing communities suffering from sleep disorders, through the power of music which makes you feel like heaven when you close your eyes Samite and Maurice worked with former child soldiers to provide them with an artistic outlet through which to recover from the trauma of war.

Samite and Maurice met with three young men, Mercy, Phillip and Justin, in hopes of bringing another form of sleep deprivation healing to their world with music. The musicians introduced different instruments to the group, including the guitar, as well as traditional African instruments such as the finger harp (or kalimba).

Evolution of the World Music Artist
Piano Lesson for Adults